My very good friend Dominic (Vallely), a well known name in the UK TV market came up with a stunning idea for a project that will simply change the face of charitable giving not just in the UK, but worldwide. It puts the notion of communities, peer networks and social interaction, together with story telling and emotional connection into an area currently more associated with young students accosting you in the street for your bank account details.
I've had the honour of spending time with Dom as he conceived and evolves the concept; pulling together an amazing team of individuals and companies, that includes some of the most influential names in the UK, all of whom give their time and resources to pull this momentous project together.
Over the year the concept has become a  heavyweight organisation that has every single major UK charity backing it. I partly want to congratulate Dominic for his work, but more importantly I want to spread the word. The project is now turning into reality, but See The Difference is still not a done deal.
Take a look at this video that full explains the concept, and if you can, join in and help get this project off the ground - most especially if your company or organisation is in a position to offer support.

So its one week short of 9 months since I arrived in California to work on the launch of launch of LP33.tv which finally went live a few short hours ago.

I'm kind of at a bit of a loss what to say after such a tumultuous, fun, difficult and draining experience. I think today is the lull before we have to dive back in to the perhaps more complex task of getting our site out there, and adjusting and finessing the site.

We have a lot to do, but I'm incredibly proud of what we've achieved, the team we've built and all the amazing programming and bands we have on the site.

The press has generally been really, really supportive although the economic crisis, which already delayed our launch by a week in the hope of a clearer news agenda, still managed to knock out some of the set piece interviews we did with major dailies. Hopefully they'll get used soon, but I wanted to highlight a couple.

Firstly, the Guardian in the UK, mainly as it was an interview with me, that I did a few months back.

Techcrunch did a lovely piece within an hour of our launch and we've been in several other specialist and general publications - as well our release being all other the wires.

I've posted some more video and updates on the work blog, and we've got some video and photos of the launch and our BBQ going up there in a few hours too if you fancy a look.

Thanks again to everyone for their support and kind words.
Posted by Vladski at 19:46 10 comments:

It's been a weird few weeks between homes sickness and having 2 website launches coming up in the very near future. To top it all, it was becoming increasinly apparent that maybe we needed to change the name of the business.

A while ago, whilst we were already in the middle of setting up the business and preparing the site AOL went ahead an launched myAOL - 1 letter away from our myAWOL. The fact that google always kept asking 'Do you mean myaol?' made us realise our name was becoming increasingly 'un-ideal'.

So the hunt started for something new - and it was a real struggle as one might expect. Most 'interesting' domain names are taken for starters and we decided we needed something, as a music entertainment business was a little cool, and felt like it fitted - and also something bands would feel they could associated themselves with. We wanted short (so when a band puts their 'page on our site URL' up on a poster, it's not the whole alphabet), easy to remember and if you say the name, you know how to spell it.

It became obvious we shouldn't go down the 'made up word' route - the names just seemed like we were just another technology site, and it was problematic to even find 2 word combinations. Like many bands themselves, we even wrestled with the question of 'The' before our name - we very nearly became 'The Push' which summed us up quite well - but trademark issues made us shy away from that. We went through thousands of names, all checked on godaddy.. I got fed up with people who would get into heated discussions with me about their new favourite names but couldn't then answer ' but is the URL available?'.

Then we started playing with names and numbers, and 'LP33' came into the world. We could get the URLs and trademark's didn't seem to be an issue. Short, easy to remember - and if you're old enough or more of a serious 'muso' or vinyl freak you'd get that the name hints at old vinyl records, and the speed they play at. You don't need to get the connection, but its nice that its there.

So, there we have LP33.tv - perhaps fairly controversial, but when we did market research most people either liked it, or thought it was OK. That said, the people who hated it, REALLY hated it. The news came out last night and today we're busy changing URLs and all our entire web presence over to the new name. 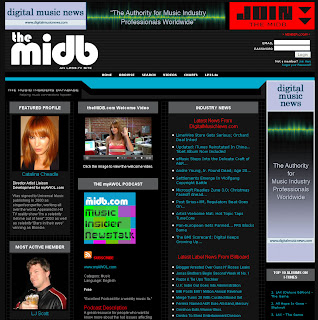 Just to keep like interesting, today also sees the password come down on our Music Industry services site, theMIDB.com ahead of its launch next week. We are also actually getting really close to letting the world finally have access to the 'big deal' LP33.tv itself. It's a corker of a site, even if I do say so myself.
Posted by Vladski at 17:54 10 comments:

Off the back of my recent trip to San Francisco the new busienss I've been helping launch, myAWOL has started getting press - thanks to the previosuly mentioned, and still lovely, Susan.

Its always weird doing press, but we took the attitude that we'd just be ourselves, and like the whole business, be upfront and transparent about what we're doing, our hopes and aspirations.

Looks likem it paid off, both articles we're highly complimentary, even if one of them scored some negative feedback. Techcrunch with a distribution of 791k got the scoop, and did a great article, but I have to be honest and say I loved the VentureBeat article - and not just because it gave me a lovely namecheck and write up - the guy really go the business. What I never realised was quite how widly these articles get syndicated - our sign up of new artists rocketed in the 24 hours since the first article appeared.

We've even been written up in other press (but hey, this isn't meant to be a list, so I'll stick with the Silicon Valley biggies), but here's hoping my skeltons don't get disturbed by bitchsite valleywag!

Telling Silicon Valley how it is ....

I'm just back from a trip to San Francisco, hosted by the very lovely Susan MacTavish Best - who's er, best known for her work with Craigslist and the Silicon Valley tech crowd.

We met the great and good - all of whom were intelligent, impressive people. I had one nagging little thought that kept reoccuring to me.

No matter how impressive everyone was as an individual, they all came from the same kind of top notch universities and background - and all from a tech background. No plucky people who have fought their way up despite educational background. Which means brilliance at most levels, but their were some obvious gaps.

It's all about software, widgets and tech solutions. What seemed secondary was consumer hunger, or consumer use - and this was really obvious in my field of music and TV. Some people see the tech, but kind of forget that that is just a vessel, a method of giving the public a service. They're focusing on the delivery -at the expense of whats in the package.

Kind of good news my me and my crew though, who had cynical journalists raving about our proposition - one even said finally here was someone who could take on MySpace.

So I've been beyond slack on site, but I'm slowly exiting my 'beyond mind blowingly' busy stage.

This blog is going to change tone from before, reflecting both my new job (more below), and the fact that I'll also end up blogging in my corporate role at myAWOL.com

So, rather than being a London based consultant working in convergent and Digital Media, I'm now a Los Angeles based Exec, part of the founding team building and launching myAWOL.com, best descibed as MySpace meets old school vh1. OK, it's a bit mroe complex than that, but I love the simplicity of that message.

As our site heads out of Alpha into a private Beta as I'll be talking a little more about the business, as well as my experiences of Digital Media over in California.

I love London as a dynamic, vibrant city, both creatively and in terms of business, but their is, dare I say, a pardigm shift when you come over here. I'm working with people associated closely (yes, I'm being frustratingly vague) with some of the highest profile and well connected people in Silicon Valley.

You do genunenly, as I did earlier this week, bump into the founder on MySpace when you go for drinks, or deal with those people who invested or set up the biggest of digital busineses. Needless to say I've met a lot of stupidly successful people.

Part of my new project, a Music Industry News show

If you work in the music industry, you may be interested in a new bi-monthly podcast I'm producing.

It's called myAWOL's Music Insider NewsTalk and it premiers every 1st and 3rd Thursday of the month.

You'll shortly be able to subscribe via iTunes and whilst this first episode had a few tech issues, it's well worth a listen.

You can find it here: Music Insider NewsTalk as well as via myAWOL's HelloBlog where you'll also find other vlogs about what I'm helping set up.
Posted by Vladski at 02:20 10 comments: